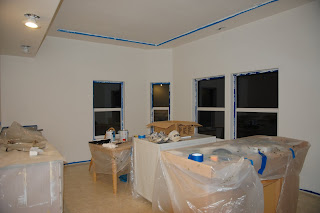 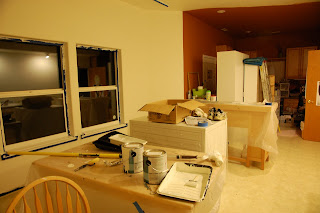 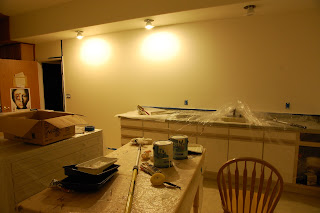 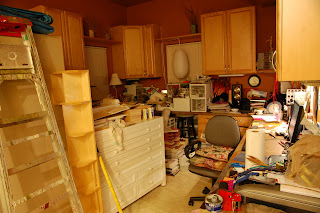 Where everything got stuffed
This was last weekend during painting. Originally I wasn't going to paint but I decided since almost everything was out anyway that I needed to do it, so I took everything off the shelves, took down the shelves, and we painted. I did the walls and William did the ceiling, sort of an off-white. It looks great, especially with the blinds!
Yesterday we painted the orange part to meet the white (second coat to be applied today) and started putting the shelves back. I decided to paint those too, since they were brown. Maybe, finally, I'll be able to start putting stuff back. The other three units, which are sort of like tables rather than cabinets, will not be arriving until after the 19th, so I still won't have a finalized floor-plan or a place to work until those get put together.﻿ They're movable so I have considerable flexibility.
The other morning, I did do a bit of watercolor experimentation trying to find a sketchbook that wouldn't bleed through. It was fun working on a proper surface.
As for the first week of school, I survived. I have huge art classes (27, 25, 25 & 17). The 17 are seventh graders and they are probably the most immature and recalcitrant bunch I've ever had. Behavior problems abound. Perhaps my expectations are too high. After all, they're only twelve.
None of the art materials I ordered were there yet, so I punted and gave the kids simpler projects that nevertheless help me understand where each student is in terms of skill level and understanding of art concepts. They are all over the place: my advanced classes have people who have never had art alongside those who've had it for six years. Stick figures (literally!) next to rendered and shaded objects. I must be insane.
I've got mid-school art, ninth grade art, and basically just two high school art classes. Because I'm part-time again this year, I have no true art program, no sequence, no scope, very little to build upon, but I try to provide as much rigor as I can with such a mix of kids.
Such are the woes of the teacher in a small school whose programs have been steadily cut over years of state-sponsored non-support of public education. I don't even want to think of what it's like in the bigger cities.
I am, however, looking forward to retirement. I've been a department of one for too long.
Posted by Eilidh at 7:41 AM