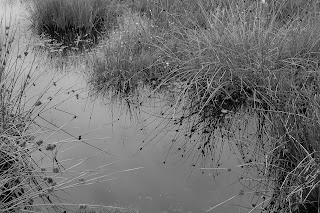 A contemplative picture of the boggy earth where so many Scots lost their lives in the last major battle on Scottish soil: Culloden Moor. The aftermath of that battle between routed Jacobites and triumphant Government forces, along with its consequences, are still reverberating in the psyche of the Scottish people, and in real suffering to this day among the Highlands and Islands. It was a moving experience to have walked this ground last summer, to have moved among the silence of the ghosts there, to hear the wind in the grasses, see the blue and red flags in mute testament to the tragedy of Charles Edward Stuart's youth and folly. One asks as one walks, "What if they had won?"
We're heading to Seattle this morning for my last class in Scottish Gaelic for the year, held tomorrow in Shoreline, Washington. I have not studied. I cannot remember anything I learned in the previous almost-two years. My head is full of stuff and there doesn't seem to be room for any more. In Gaelic: Tha mo cheann lan.

However, I'll not give up. I've pre-enrolled in the Atlantic Gaelic Academy's distance learning course for next year: three hours of spoken Gaelic per week, from September through May! I am excited, and a bit nervous at appearing retarded. It will mean a 3-hour committment to Wednesday evenings.

Someday, I will get this language. It might be after I die... 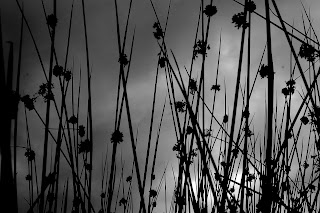 Grasses at Culloden, against a glowering sky. 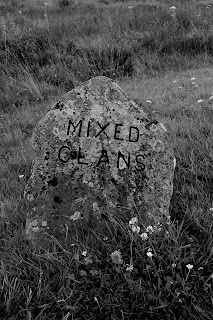 Mixed Clans monument stone at Culloden
FYI: Slighe nan Gaidheal...Way of the Gael, the volunteer organization in Seattle that seeks to educate and foster the Scottish Gaelic language and culture. Their motto is "Chì mi na Morbheanna." I See the Great Mountains.
Posted by Eilidh at 7:43 AM