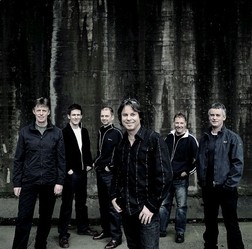 This is going to be a long story...

So this is how it all transpired, my brush with Runrig, my favorite band on the planet forever...I discovered Runrig, as best as I can recall, sometime in 2009, early it was in the year, when I was searching around the web for the sounds of Gaidhlig. The first Runrig song I heard was Alba on You-tube--very bad production quality and typically cheesy 80s video, but a stunning song. From there it snowballed, until I purchased my first CD set: The Gaelic Collection. By that July we were planning our Scotland trip, by August I had signed up to take Gaidhlig classes through Slighe nan Gaidheal in Seattle, and was on my way to learning this beautiful tongue that I had begun some twenty-eight years before!

I got more music, most of it in Gaelic, and listened to it constantly, to the annoyance of my students. (Captive audience!) Then I got the ones in English, which I was uncertain about initially, but fell in love with the poetry and the tunes and the music and Rory Macdonald's and Bruce Guthro's voices.

I went to the Seattle Feis in the summer of 2010, where I met Alec Macdonald, one of the language presenters, and brother of Robert Macdonald, the accordionist who played on Runrig's Play Gaelic album from 1978. He'd brought a couple of Runrig posters from Scotland to donate to the silent auction. Being obsessed with the band, I put in my bid and won two of them. Happily, I shared this news with Alec, and he offered to get the posters signed by the band and back to me. (You cannot imagine my ecstasy!)

Meanwhile, my family and I went to Scotland and had a wonderful time despite the hectic pace and funny turns we had about the place.

It took awhile to get the posters--the band members live in different places (Bruce in Canada), and they tour extensively in Europe during the summer, but at last I received them signed, along with a letter from Calum Macdonald, the guy who writes the poetry. Thank you Alec!!! (See more about Runrig on their website.)

I love this band. They made me love music again, and words, both Gaelic and English; they inspire me when I'm ready to despair of learning Gaelic because the old mind isn't as snappy as it once was and learning a new language is harder; they make me feel better when I'm down, and remind me of what it means to be a human with a Montana heart and a Scottish soul.

Recently I purchased CDs for my two thirty-something kids, who like the band (!), and a book called Runrig Reflections, which has the most stunning photos combined with selected Runrig lyrics, in both Gaelic and English. And I'm planning for more music as soon as I can, (old stuff from when Donnie Munro was lead singer), and a visit to hear them live as soon as they come back from their year-off. They've been making music for nearly 40 years. They are awesome.

Some examples...
"arise soul
soar abvove the singing river
go lying down
into the ground
quuckened by the stream
when all is said and done
the race moves on"
From Running to the Light on the Stamping Ground
Oran Ailein 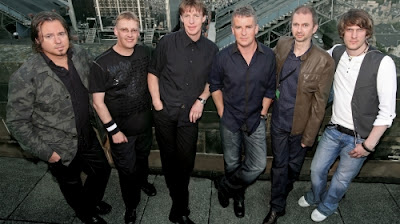 Cool story Gig! So glad you finally got your posters back all signed and everything. Where do you have them haning? In the studio? In your secret Runrig shrine? :) Hugs

Thanks, Melis! They aren't framed yet--I'll probably do it myself as soon as my hand gets a bit better. I wish I had a Runrig shrine, but it'd be no secret. :o) Hugs 2!

Just read your story I have been a fan since 1983. Just devastated they are no more. I hope you like listening to Donnie, he is a fantastic singer, I think that's when funding were at their best with the famous six - Callum and Rory, Donnie, Iain, Peter and Malcolm.

Just read your story I have been a fan since 1983. Just devastated they are no more. I hope you like listening to Donnie, he is a fantastic singer, I think that's when funding were at their best with the famous six - Callum and Rory, Donnie, Iain, Peter and Malcolm.