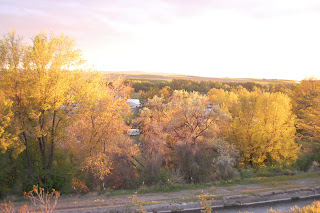 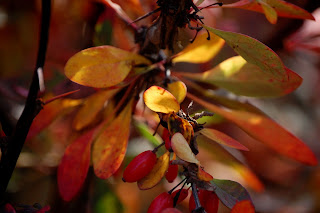 At Mom's old house...
I see winter in the wind...in the slant of the light, in the looming darkness, in the dread of October, in the long blue shadows cast by the smoky saffron light. The leaves are turning.

I hate winter. One might wonder why I want to move back to Montana. Crazy I guess. It's the light. Really.

Apparently I have seven followers. I don't know who you all are, but thanks for following. My computer is 63 in dog years.
Posted by Eilidh at 11:07 PM 4 comments: 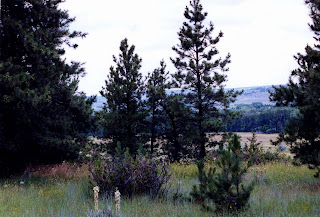 Above the Stillwater River, Montana
﻿
I am about as far from the Twin Towers as it is possible to be, although in 1970 I was in New York City when the towers were being built. I think I saw them...
I was on my way to work that day at the frame shop...later I could only watch  in horror as the planes flew into the buildings, and I could only watch once.
As I listen on NPR to the ceremonies happening and the comments being made today at Ground Zero﻿, I am often moved to tears by the simple and poignant words spoken by those who survived, and those who lost loved ones on that day, in New York, Pennsylvania, and Washington D.C. I too remember all of those lost since: soldiers and civilians and inhabitants in Afghanistan and Iraq, on the streets of our cities, in Somalia, Libya, Africa--everywhere that people lose their lives to senseless violence, and there is so much of it in the world.
Ten years ago--how time moves us through our lives, as we remember those we've lost, greet those being born, contemplate the lives we have, the goodness of people juxtaposed with the evil of people. As human beings we each have both of these within us--the brightest and darkest of impulses. And part of being human, I suppose, is learning to discern between these, and all their shades of gray, and choose our journeys on the myriad pathways through life. They lie before us like the convoluted, shifting streams of a river delta, confusing, misleading, intertwined. And despite how it looks to us small beings, who believe we are each alone in our little rivulets, each of these streams is connected in some way to all of the others, and eventually they all lead  to the same ocean.
I am changed by the events of 9/11--every one of us is, in countless ways; altered in ways that cannot be exactly articulated, and perhaps have no need to be articulated.
Life goes on. It continues inexorably, until we are gone and dust, and even then it goes on without us.
"Arise soul
soar above the singing river
go lying down into the ground
quickened by the stream
when all is said and done
the race moves on."   Runrig, from Running to the Light
"Eventually all things merge into one, and a river runs through it. The river was cut by the world's great flood and runs over rocks from the basement of time. On some of the rocks are timeless raindrops. Under the rocks are the words, and some of the words are theirs. I am haunted by waters."
Norman Maclean A River Runs Through It 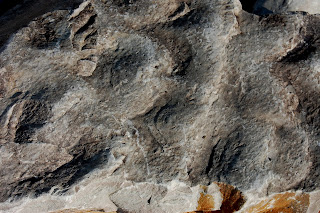 Primordial ripples from the basement of time, Missoula, Montana, 2007
In the end we are dust.
Posted by Eilidh at 11:29 AM 2 comments:

Light At the End of Both Tunnels 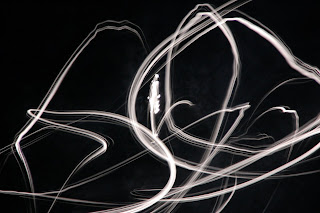 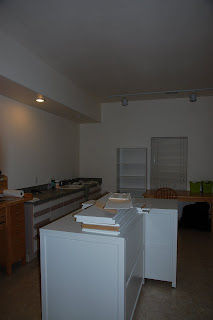 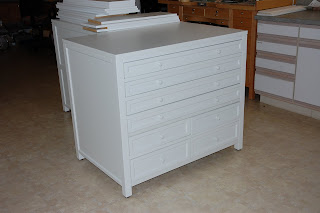 Progress...
Well, it's been a busy week and no rest in sight. We spent the Labor Day weekend in Montana on a whirlwind mini-holiday to visit my son in Helena. My daughter came too, so it was a real delight to be with them both. We visited my sister in Butte, and also my former in-laws, whom I hadn't seen for several years. Unfortunately when you divorce someone, you divorce their family as well. They are lovely people and I've missed having them in my life.
The painting was finished in the studio last week, except for the window trim. The three desk-cabinets arrived today--a couple of weeks early; those will have to be put together soon so that I can reassemble my workspace.
There is light at the end--a bit of delayed gratification because we're gone again this weekend, and I start both my Gaelic classes soon, and have to finish my graduate-level course in education as well. I'm mentoring two girls on their senior projects this year, and of course I'm yearbook advisor again. Last year's book was awesome--probably my best ever. I'm very proud of it.
And the other tunnel...retirement. A few years, I tell myself. If they go as quickly as this one has, it'll be no time and we'll be making our home in Montana. Some days this notion is all that keeps me going. I just hope the light I see isn't an oncoming train.
Note to my followers: If you read this, please know that I cannot access who you are. I now have six, according to my dashboard, but they do not appear on the dashbord or the blog itself. So if you could just let me know who you all are by leaving a comment (if you want to) that would be great. Thanks.
Posted by Eilidh at 10:19 PM No comments: