Home is Where the Cat Is

I went home to Montana this past weekend for the first time in forever, to the little town of Shelby, for an all-class reunion. Such a flood of memory...as we left and headed toward the Rockies, things converged inside me and outside in that incredible light that only Montana possesses, and that special atmosphere of the high plains. Amid some tears, this poem came to me. If it's not very good, that's okay--I'm pretty certain nobody will read it.

Still, it was necessary to get the words out and onto paper. I only wish this blog-program would conform to the way it was written without having to reduce the type to a point where it's unreadable. But what am I worried about anyway?

In the vastness of the Northern Plains, I was raised,
A land of uncompromising and astonishing remoteness,
Where the only certainties are a cutting wind and a clean sky,
And that long stretch of country holding the horizon as far as human vision reaches.

A place of grudging magnificence and profundity--some would say a wasteland--
Where emptiness and silence roll out like a blanket of riddles
Across the broken coulees and bluffs,
Abrupt and precipitous amid the endless waving grasses.

River breaks, their cottonwood banks a surprise
Of inscrutable green in the tawny heat,
Give way, after a swift respite, to the clanging sun,
Until the distant and crumpled strata of the Front
Arise to contradict the flatland without equivocation.

Great fractures created by the forces of compression and thrust-faulting
As tectonic plates crashed together,
This insurrection of stone was further altered by massive continental ice sheets,
Scouring the plains and carving the piles of solidified sediment
Into cirques and arêtes,
Gouging out great attenuated valleys where lakes of cold, clear water lie,
Connected by silver streams like beads upon a strand of silk.

It is no land for the fainthearted, or the weak, this place of daunting geology.
One must seek diligently beneath the surface for its secrets—
And oh, yes, there are many,
Whispering on the breath of autumn as it sprints unhindered across the plains
In the middle of July,
Or in the rush of some unnamed brook in spring-spate,
Leaping gleefully out of its banks.

Within the thunder, sudden and unanticipated as it reverberates
Down a narrow valley and across the surface of a lake,
Are the voices of time, murmuring yesterday into eternity.

I breathe deeply of the electric air. Somewhere, there is lightning.

Posted by Eilidh at 7:49 PM No comments:

Email ThisBlogThis!Share to TwitterShare to FacebookShare to Pinterest
Labels: Montana 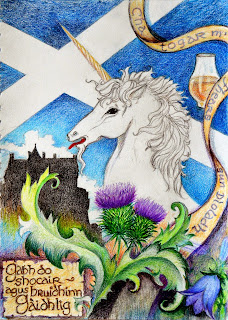 You should have let us go, UK.

Posted by Eilidh at 8:39 PM No comments: