and the backs. Not very good photography...
These are the first three surfboard pendants in fine silver (.999FS.) that I've made. I had fun making these, using textures with metal clay, and then cutting them out using templates that look sort of surfboard-shaped. I had to do a bit of sanding. On the backs of the second two are wave designs, and I made bails out of 18g fine silver wire, attached with PMC3 slip. The lot were torched, brushed, polished a bit, and put on chains. The top one I've been wearing for a few days. None of them have fins. I thought they'd catch on clothing. Earrings are next, but not until I get some other stuff done, like grading, laundry, vacuuming, scanning senior pictures, and donning my armor for another hectic week. It's the end of the first quarter already!
Posted by Eilidh at 5:59 PM 2 comments:

Surfing and Painting: Surfboards and the Elements of Design 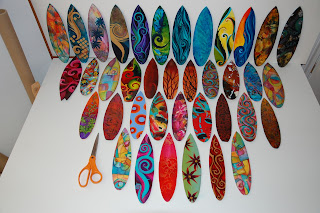 All 38 surfboards. Whew! The last for awhile, I'm thinking.
Couldn't crop the picture because I no longer have Photoshop. 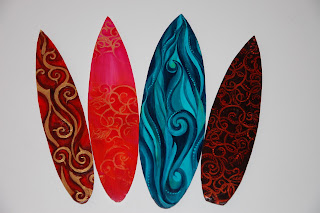 The latest four.
Surfing...So, my favorite surfer Owen Wright lost in the Quarters at the Rip Curl Pro in Peniche, Portugal, to Julian Wilson, who went on to win the whole event. I like Julian and he needed to win something. Owen eventually lost, but not before he surfed a perfect 10 and beat Mick Fanning in Round 5, which may be a vindication of sorts... Owen traveled to France and Portugal with his GF, his dad, and his little bro', Mikey. I wonder whether Tyler was there?

During the competition, I also enjoyed reading The Sardine, a nifty little e-mag Rip Curl published online during each of the many lay-days while everyone waited for the storm to hit and then abate, and the resulting swell to surge and then clean up. When surfing started again, one guy had sardines falling out of his wave right in front of him, slapping his face!
The world tour goes next to Santa Cruz, CA in November, and then it's on to the Banzai Pipeline on Oahu, Hawai'i for December, the last pro comp of the year. For someone who will probably never attend any kind of surfing event ever, it's fun, entertaining, and educational (!) to watch the world's best surfers fight it out on the world stage. These guys are serious athletes. A great many of the results rest on the luck of the draw, the waves one gets, plus a whole lot of other variables, and the finesse with which one can read and ride the sets. It takes physical skill, stamina, and an intimate knowledge of a swell and how to choose good waves that make a great surfer. And perhaps being born beside the sea and learning how to swim like a fish helps as well.
Painting...So what do surfing and painting have in common, aside from the fact that really beautifully decorated surfboards exist out there and people all over the world are riding art? The surfboard is a great canvas for art. Some surfers paint their own boards, and many of them are quite good. To paint a board takes skills other than how to surf: at least a modicum of art training (how to hold a paintbrush, say), and informal knowledge of the elements and principles of design (if it looks good it probably is).
Meanwhile, I love watching the aquamarine waves curl over onto themselves, break white, and fan out over the sand like foamy lace, and I like learning about surfing: the ultimate contest between man and the sea with nothing but a little bit of rigid foam between tiny human and big blue water. Foam-balls and chandeliers, two-wave hold-downs and barrels, floaters and face-carves. I love the ocean too, but not enough to live on the coast--the Oregon one anyway. Southern Cali--well, that's a different story that'll never be told. But I will always be an artist, and I'll continue making these little jewels until I get tired of them. I'm still hunting for an old genuine surfboard to paint on too. In the meantime, I'm making the tiny ones out of rag foam-core and just fashioned my first little silver surfbaord pendant. Picture later.
Owen gu brath!

Posted by Eilidh at 8:03 PM No comments: 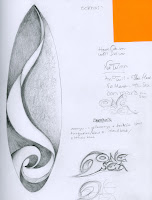 The logo design-work for my new company (haha) One Sea, or maybe One Wave--haven't decided yet...

Between gradually changing my lifestyle to one where carbohydrates are limited to vegetables and fruits, sucessfully making my first batch of coconut butter (yummy), watching the last 4 heats of the Rip Curl Pro Portugal Round Two at Peniche (along with a couple of previous heats I missed), grading a whole slew of papers (teacher's curse), and making a trip to the local health food store where I purchased some low-carb ingredients and a lovely turquoise scarf, I got some painting time in and have created a couple more tiny surfboards in the last few days. 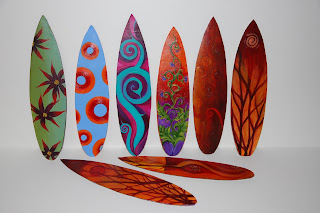 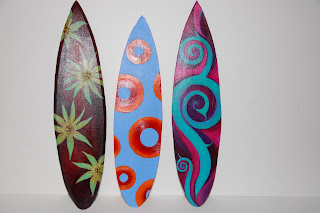 And just to show the bottom of the Hawaiian shirt-themed one, on the left: I did a reverse.
It wasn't a 360-air, but hey... 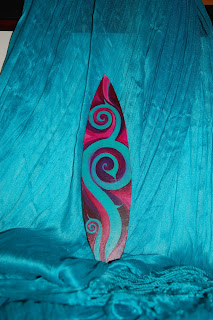 Medieval-design surfboard with matching new scarf.
Although I love watching the ocean roll in over the sand, I know I will never surf in it, or swim in it, or ever feel comfortable in water, although I may try to paddle-board someday. I can't swim and I  grew up far from any beach. The first time I saw the ocean I was 33 years old: Long Beach Peninsula in Washington State. As sports go, I suppose I could like a worse one than surfing. It's fascinating and beautiful to watch. I know most of the pro surfers' names now and have my favorites: Owen Wright, Mick Fanning, Kelly Slater, Josh Kerr, Gabriel Medina, Jordy Smith, et. al. Everybody, really, unless they're surfing against Owen.
And this isn't exactly new: when I was in 8th or 9th grade, I was babysitting, watching the couple's color TV after the kids were put to bed, and I saw these guys standing up on longboards, riding the impossibly beautiful aquamarine-sapphire barrels of the Pipe in Hawaii, getting totally shacked. I was blown away. Maybe I'm just entering my second childhood.

Email ThisBlogThis!Share to TwitterShare to FacebookShare to Pinterest
Labels: and a new scarf, food, surfboards

The First Attempt is Often the Best

I still love this version the best. 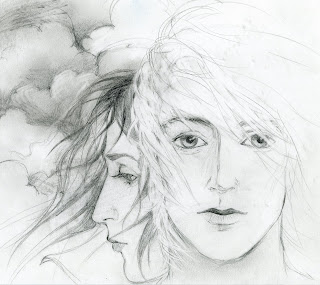 Eilidh and Taliesin: the first incarnation, now nonexistent,
except within the workings of my computer... 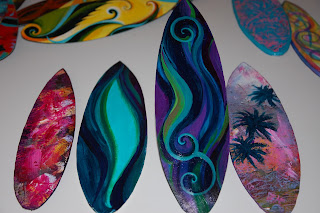 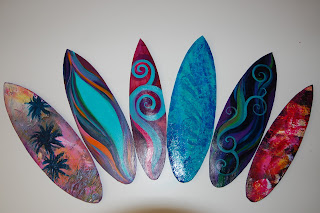 ...and more silliness from the world of tiny surfboards.
Having fun with my new colors. I haven't had new
acrylic paint for a very long time.
It occurred to me some time ago that the curl of a wave is the same curl of a vine-tendril, a whirlpool, a fractal, the center of a flower, the whorl of a galaxy, the spring of a fern; the Fibonnacci sequence as a metaphor for life, perhaps. For me the curl, the wave, the spiral, is endlessly fascinating. What is the basis of the primal attraction we humans have for this ancient symbol?
﻿ 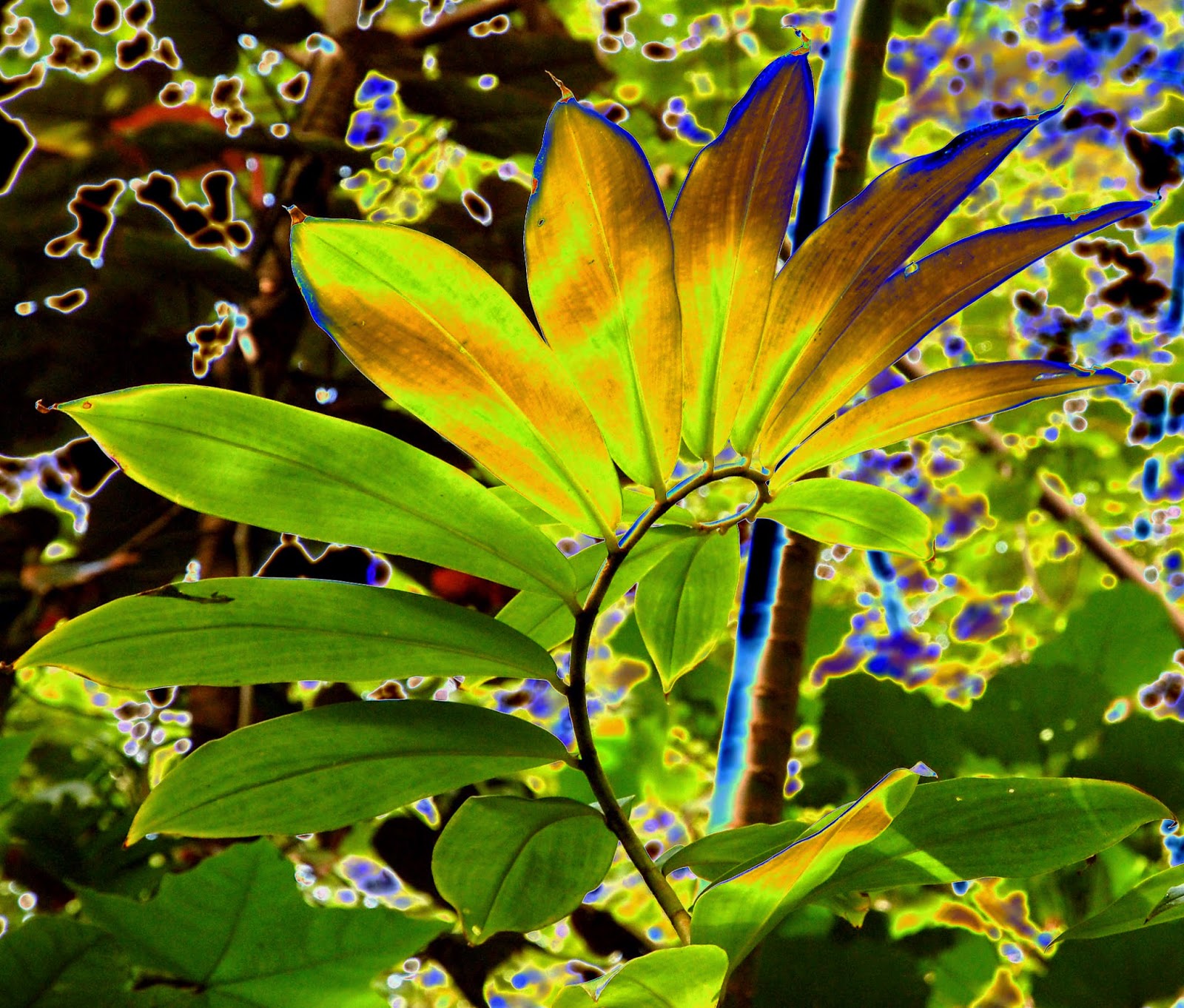 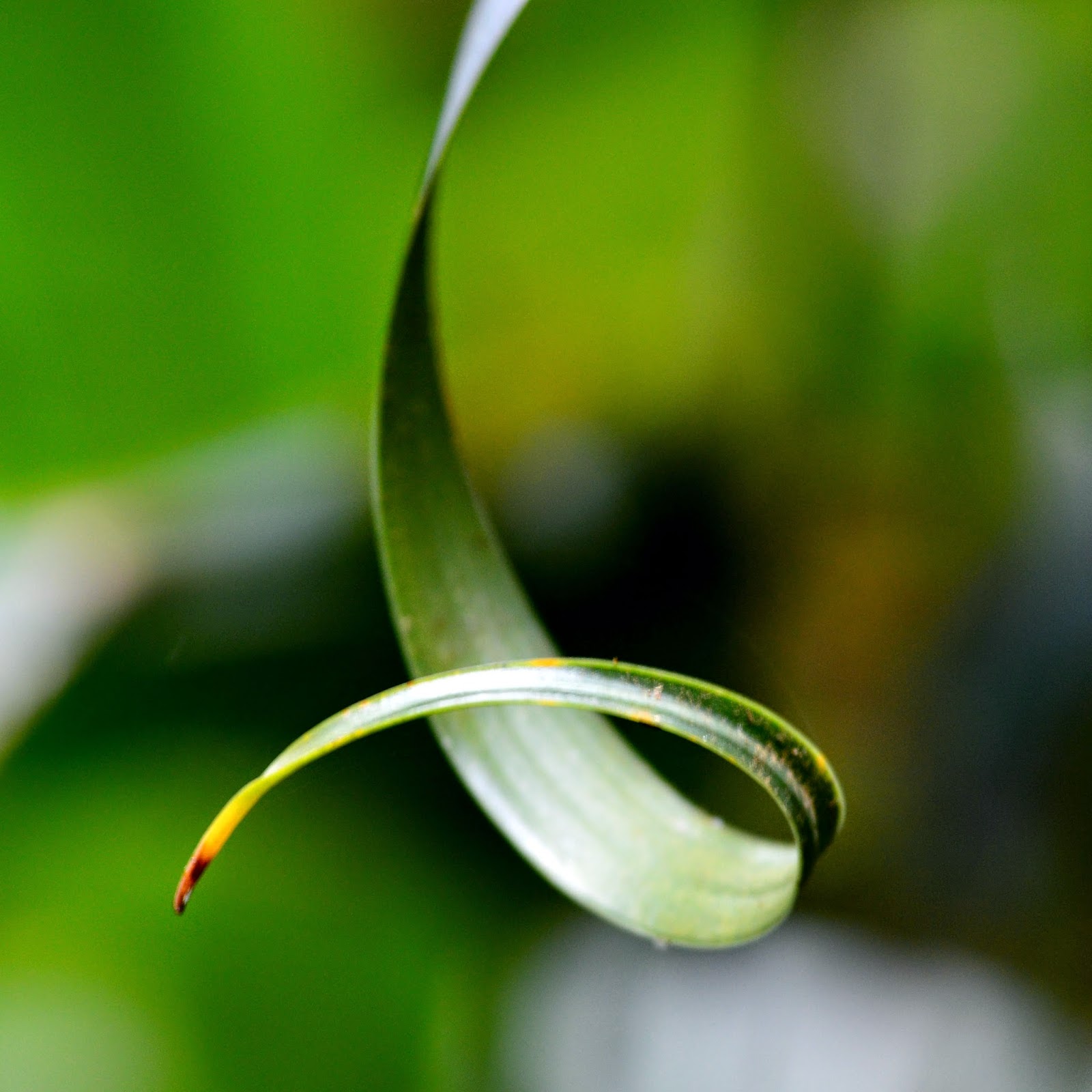