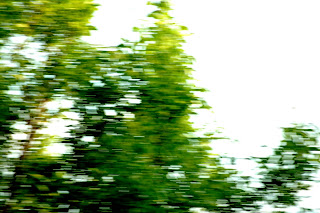 Runs With Camera
I just realized something, several somethings in fact. Blogging rhymes with flogging.

Why am I writing this blog? Who is my audience? Is it narcissistic to suppose (or to hope) that someone besides myself reads this? Otherwise, why publish it? Is blogging a symptom of blatant exhibitionism? I've been accused of being an extremist, but exhibitionism? I never dreamed I'd be blogging in the first place. When I decided to go forward it was half by accident. Obviously, despite my arguments to the contrary, I have too much time on my hands.

Who would want to read this drivel, and indeed who does (besides you, Melis, because you're my sister :o} and you sort of like me!)? The act of blogging itself assumes that one is a decent enough writer--or believes one is--to withstand whatever embarrassment may come of not being decent at all. Or does it? Or is anybody capable of embarrassment anymore? And does it even matter?

Anyone can say anything in cyberspace, reveal anything, conceal anything. It's rather creepy in a "big-brother-is-watching" kind of way when one ponders it too much. How many eyes see this page, for instance? Hardly any, I think, judging by my perusal of the statistics that I recently discovered were available on the dashboard paradise, which is comforting in a way.

Who on the green earth would want to experience the whining and banality expressed here, or on any public forum for that matter? Are they after the results of my highly professional photography skills (tongue in cheek)? I'd only be offended if someone downloaded one of my pictures and claimed they'd taken it. As an "artist", I technically hold the copyright to my work until fifty years after I'm dead, but that's not very reliable. Who knows on the internet, which constricts at the same time it broadens, imprisons at the same time it frees? Free for whom? And who cares?

An acquaintance once told me that I think too much. I wanted to retort that perhaps she doesn't think enough. But maybe she was right.

No kicking the baby allowed! I more than sort of like you and you do take beautiful professional quality photographs and your writing is wonderful (and I'm not saying that because I'm your sister either, so there).
I understand what you're saying because I sometimes think the same things myself (well, not about the writing part because I know I'm not a good writer but about blogging in general). I just have to remind myself that if no one reads it then that can be a good thing because it frees me up to be imperfect. :) I can write less than stellar sentences and post less than stellar photos and drawings and not stress that a zillion people are going to be judging me by my work. :)
At this point I just know you're reading this and panicking, thinking, "Wow, aliens must have abducted my sister. She's not usually a glass half-full kind of girl." Then you'll read this next part and sigh in relief because the aliens must have decided to give your baby sister back. Being the needy girl I am, I long to be popular (must be because I never was in school) and I want my blog to have lots of readers and I get discouraged and think I'm too boring to read and my drawings are crappy and nobody likes me and there must be something wrong with me and all that other crap that goes through our heads and I almost decide to quit but aliens must have really abducted me because for some reason I keep being positive and hopeful about blogging. Go figure!
So, write for yourself, post whatever you want and just enjoy the chance to express yourself!!!! You know I'll always read it and I must count for at least 10 people, right? ;)
Love you!

You count for more than 10, little sis! Thanks for liking me and for being my sister and #1 supporter on here! Not that you have a choice about being my sister--we were born that way! :o} As usual I've been thinking too much, wondering why I do this, or anything else, when it's just such a waste of time. I could be making stuff (which I am, every day) but for what?

I haven't sold anything in years and I have all this expensive "art" piled up and no place to put it and sometimes I think I should just burn the lot of it so my poor kids don't have to sort through it someday. For me I suppose validation occurs when someone likes the work enough to get out their checkbook, since I'm purportedly a "professional" and would like to be compensated. It's that old money bit. And then fact strikes me that I must be really crappy after all, or I'd be able to make a living as an artist, but then do I want to work that hard on just one thing, or have a bag of potato chips and sample all of them? Am I a dilletante, a dabbler, a player-around with expensive stuff? I suppose I am.

(It fits with my ADD: ooh! There's something shiny! Crap! Look at the time, gotta go...where did I put my keys? Hey, I might have time to finish this project, and maybe write another paragraph--oops, I'm late for work!)

But then, you can't stop creating just because your output doesn't have a home. I've tried that too, and it so doesn't work. I figured blogging might be a different creative venture--all it costs me is a little time to write mediocre crap, post it, then feel sorry for myself because nobody reads it! Or feel sorrier for those few who have to "listen" to me whining all over the place. Are we gluttons for punishment or what!?

And you sell yourself far short, my girl. You are a fantastic artist, and not a bad writer either. I love your work and wish I had lots more of it (hint, hint!) Your photography is amazing and I admire you for the work you do and envy you the freedom you have to create.

We should figure out a way to become millionaires and we could just play around with materials without having to work so hard to support our artistic habits! Or maybe we should just try to be abducted by aliens...Can you tell I'm tired of teaching? Maybe I should just stop whining and bite the bullet...or drop a 150 pound anvil on my foot. Hmmmm.. I need one of those, don't I?

Love you too, Melis! Hugs, and we'll see you in three weeks! My last Gaelic class for the year is on the 21st of May. You should come for a visit...