Montana: More about being an Exile 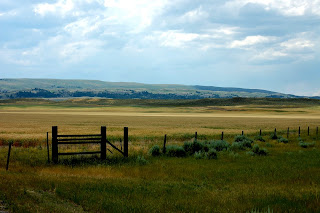 Somewhere in Montana
I'll apologize, first off, to my few readers, for what may sound like whining. It is whining. That said...

I remember the first time I really recognized how much I missed home. I was almost thirty-three. It was June, just after school had ended, the start of my first summer in Oregon. We--my youngest sister and I--traveled to Montana to help our grandparents move from the farm into a house in Hardin. They were just too fragile anymore to make that eleven mile trip over icy roads, or even dry ones. Neither of them had good sight, and both were suffering from a variety of health issues.

On our way we stayed in Belgrade, sleeping on the floor at my old house, a 15 x 60 foot trailer that I used to live in with my kids, which was now temporatrily occupied by my other sister. I arose very early in the morning, with the sun, and stood at the window, crying like a crazy-woman. Everyone thought I was stupid. I thought so too, when I remembered the last blizzard I experienced had been in May of the year before--and what the hell was I crying for, to come back to that from the land of milk and honey that was Oregon?

I got over it, eventually, and went back to my career in Oregon, if you can call teaching junior high art a career.

The second time however, was profoundly affecting, and it happened in Missoula. We were staying in a motel there, my husband and I, or maybe we weren't married yet, because I don't remember what year this was... Not a bad motel but not the Red Lion either. Again I was up before dawn, and looking out the window at the huge sky filled with morning, I realized that this was the only place on the planet that had light like this. Nowhere else has that light, nowhere that I've ever been, which isn't very many places--just nine countries and about seventeen states. Nowhere. Not even close. I realized at that moment, as the sun rose over the mountains and the Clark Fork River, that I had ripped myself out of the one place that I loved, the place that was the cradle of my being, homefire of my soul, and that for me, there would probably be no returning. Not to live. Only to visit, as a reviled tourist in my own land. I began to cry, and this time, I didn't get over it. I'll never get over it.
Posted by Eilidh at 11:00 PM

Wish I won the lottery or something so we could have a summer home there. :) There are so many, many things I'm grateful for living where I am; I wouldn't be the same person if I hadn't left and that's a very good thing. But, the light, the sky, the mountains and hills, the prairie, the sun on winter snow, get in your blood and you can't transfuse them out.

Hey, maybe we can pool something together and buy a little cabin--we'd need a bit, along with our lottery winnings! Someplace to write and paint and dream and relax and be...wouldn't it be lovely, Melis?