Notes From an Exile 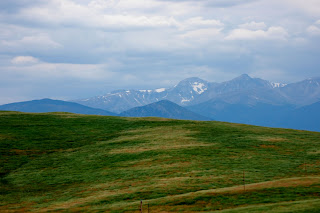 So I write as an exile, having been away for twenty-five years, selectively remembering only the softness of springtime and long summer days but not the brutality of winter. I only remember the rising sun early over the plains striking itself into molten copper at 4:30 a.m. on the 49th parallel, not the bitter, endless darkness of October through March—six months of winter, with snow in May and sometimes in September. I remember being a child in the whole wonder of it, but how soon I forgot it in the hardships of adulthood, having to slog through snow so deep it came up to my knees, shoveling driveways, chopping wood, freezing when it got 50 below zero, driving through blizzards, the car breaking down. I remember the sweet smell of lilac and pungent cottonwood in the spring, but not the allergy headaches I got from the cotton, or the subsequent nasty spring flu. I recall the fleeting summer with the light lying over the land well into night, dusks that lasted till dawn almost when there was a moon, and the stars that glimmered in this magnificent dome above me as we slept in the dewy grass of the back yard and got eaten alive by mosquitoes as big as helicopters. But not the early, too early autumn, the cold snap in October right before Halloween, the snow in November, the snow in December, the thaw at Christmas when winter wheat would rise up too early, the long freezing days of January and February and March, the dun hills, the brown grasses, the Easter Blizzard, rain and wind and more rain in April and May and June. And then July and the county fair and first kisses before school started, warm sidewalks against bare feet, chewing on the stems of sweet grass, playing guitars in the sunset over Flathead Lake, singing by a campfire, skipping rocks, creek fishing, making love in a forest somewhere that had no name. And August, sweetly agonizing in its headlong sprint into fall, and its fitful sweeping rains, crying on the land, weeping for the summer. And over and over again. As a kid, I don’t think I minded so much. I didn’t have to drive in it, or go out and try to make a living in a place whose wealth has always been gathered to the few, and the rest sent out of state on copper or coal or timber trains, leaving us natives to clean up the toxic mess and pay in cash and health for the rapaciousness of the greedy. It was grinding poverty sometimes, with two kids, going to school because my pride wouldn’t let me do welfare and I’m glad it didn’t because I was not going to stoop to that.

I’m old enough now to deserve these memories, to revel in whichever ones suit my fancy, and I’ve earned them. I’ve endured thirty-two Montana winters, but also known the sheer sweetness of thirty-two Montana summers, and it makes all the difference, and summer is still what I live for...as long as it’s summer in Montana.
Posted by Eilidh at 5:40 PM

I don't even know if I feel like a real Montanan. I spent 15 years there and 36 years in Washington...dual citizenship? :)

Hell yeah! You were born there!